Carly Rae Jepsen (born November 21, 1985) is a Canadian recording artist and singer-songwriter from Mission, British Columbia. In 2007, she placed third in the fifth season of Canadian Idol, and was a part of the Canadian Idol Top 3 concert tour. Shortly after competing on Canadian Idol, she signed to Fontana and MapleMusic, and released her debut album, Tug of War, on September 30, 2008. Three years later, she released a new single, titled "Call Me Maybe", which was released by 604 Records, and was followed by the release of her debut extended play, Curiosity, on February 14, 2012. "Call Me Maybe" met with exceptional popular success, reaching #1 on both the Billboard and Canadian Hot 100, with a YouTube video gaining over 200 million views. It also hit #1 in 19 other countries. Jepsen signed with Interscope Records in 2012. Her musical influences include James Taylor, Bruce Springsteen, Van Halen, Kimbra, La Roux, and Robyn.

Jepsen attended Heritage Park Secondary School in Mission, British Columbia and has since performed there post-graduation. She later attended the Canadian College of Performing Arts in Victoria, BC before auditioning for Canadian Idol. After completing the Canadian Idol tour, Jepsen went back to British Columbia to focus on writing, recording and completing her band. Her demos attracted attention and she was eventually signed a joint management deal with Simkin Artist Management and Dexter Entertainment. A deal with Fontana/Maple Music quickly followed, leading Jepsen into the studio with producer/writer Ryan Stewart. 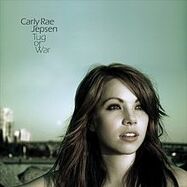 On June 16, 2008, Jepsen released her debut single and another single, a cover of John Denver's song "Sunshine on My Shoulders," and the only cover on her debut album. On July 21, 2008, Jepsen added two new songs from the album to her MySpace page: "Bucket" and "Heavy Lifting". In August 2008, Jepsen's MySpace page announced that the album's title would be Tug of War, and it was released on September 30, 2008. The page also mentioned two more songs that were included on the album: "Tug of War" and "Sweet Talker". The former was released as a single on iTunes on September 16, 2008, and has been receiving radio airplay on various stations across Canada. She performed the latter as her Canadian Idol audition. A music video for "Tug of War" was released in January 2009. "Bucket", her second single, was released in May 2009, and the video for "Sour Candy", a duet with Josh Ramsay of Marianas Trench who has also helped produce some of her songs including "Call Me Maybe", has also been released. All of Jepsen's music videos have been directed by Ben Knechtel. In spring 2009, she toured western Canada with Marianas Trench and Shiloh. She then went on a cross-Canada tour with Marianas Trench, The New Cities and Mission District. 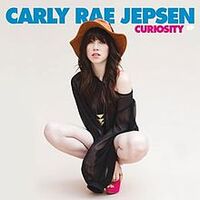 Jepsen's second album Curiosity was released on February 14, 2012. It was produced by Ryan Stewart and Kevin James Maher produced the track "Dear Julien". On the same day as the release, Justin Bieber made the announcement on the MuchMusic program New Music Live that Jepsen has been signed to School Boy Records, the label run by Justin Bieber's manager, Scooter Braun.

The lead single, “Call Me Maybe”, was released on September 21, 2011 and was produced by Josh Ramsay of Marianas Trench and co-written by Jepsen, Ramsay and Tavish Crowe. "Call Me Maybe" is the first song by a Canadian artist to reach the top of the digital chart since Justin Bieber's "Baby" in January 2010. It is also only the 11th song by a Canadian artist to reach No. 1 on the Digital Songs chart since Nielsen SoundScan began tracking digital download sales in 2005. The song has also peaked at number one on Billboard's Canadian Hot 100, being the fourth Canadian artist to do so, after Avril Lavigne's "Girlfriend", Nikki Yanofsky's "I Believe", and the Young Artists for Haiti version of "Wavin' Flag", originally by Canadian rapper K'naan.

Jepsen had been performing on Justin Bieber’s Believe Tour. She also was the opening act for the pop-rock trio Hanson. Carly is currently on her Kiss Summer Tour, with Hot Chelle Rae as her opening act. In February 2012, Jepsen visited Justin Bieber and Scooter Braun in Los Angeles, California, where she subsequently signed to School Boy Records and Interscope. Her music will still be distributed by 604 Records in Canada. On March 23, 2012, Jepsen made her first American television debut on The Ellen DeGeneres Show, performing "Call Me Maybe" (with Jared Manierka on keys), later joined by Justin Bieber. Carly was also the first Canadian Idol contestant to enter the UK charts, when “Call Me Maybe” debuted at number one.

Carly played at Citywalk at Universal Studios on April 14, 2012. 400 people who paid five dollars were allowed to meet with the singer and get albums autographed by her. 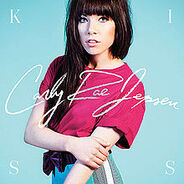 Jepsen, who is 31 years old, has been observed as dressing "too young" for her age, possibly in an effort either to appeal to the pre-teen demographic, or to keep a "squeaky clean" image in contrast to her scandal-ridden contemporaries. On May 20, 2012, Jepsen performed "Call Me Maybe" at the 2012 Billboard Music Awards. On May 22, 2012, she performed "Tug of War", "Curiosity", and "Call Me Maybe" at the first Q102 Springle Ball concert. On June 17, 2012, Jepsen performed "Call Me Maybe" at the 2012 MuchMusic Video Awards and later on she dueted "Wild Ones" with Flo Rida. On June 26, 2012, Jepsen's duet with Owl City, "Good Time", was released as a digital download. The song appears on both artists' albums, Kiss and The Midsummer Station. The song debuted at number 18 on the Billboard Hot 100, becoming the second top 20 hit single on the chart for both of them. The song later peaked at number 8.

In early August 2012, Carly announced that her second album, Kiss, would be released on September 18, 2012. As part of promotion for the album, Carly appeared on the fifth season premiere episode of The CW primetime soap opera, 90210, and performed a never-before-heard song off the album. The episode premiered on October 8, 2012.

On October 25, 2012, Carly appeared on The Late Show with David Letterman. She performed “This Kiss”. On Sunday, November 18, 2012, Carly won the Old Navy Award for New Artist of the Year at the 2012 American Music Awards. At the ceremony, which aired on ABC, she performed “This Kiss” and “Call Me Maybe”. Carly was nominated for two Grammy Awards: Best Pop Solo Performance and Song of the Year. At the 2013 Grammy Awards, which aired February 10, 2013 on CBS, Carly was one of the presenters; she and Ne-Yo presented the Grammy Award for Best Rap/Sung Collaboration. On December 10, 2012, she, Rod Stewart, Blake Shelton and Elmo were guests on Michael Bublé’s NBC special, Home for the Holidays. Carly also performed on Dick Clark’s New Year’s Rockin’ Eve with Ryan Seacrest on December 31, 2012, on ABC.

At the 2013 Juno Awards, Carly won twice for Kiss: Album of the Year and Pop Album of the Year. For “Call Me Maybe”, she won Single of the Year. The first person she thanked in her victory speech was the man for whom she opens on his Believe Tour: Justin Bieber. Candie's announced in 2013 that Jepsen will be the new spokesperson for their clothing/footwear brand. Jepsen was scheduled to perform at the Boy Scouts of America upcoming 2013 National Scout Jamboree, along with the band Train. In March 2013, both cited the controversy over the BSA policy on gays as barrier to their performance. Train released a statement saying that it "strongly opposes any kind of policy that questions the equality of any American citizen ... We look forward to participating in the Jamboree this summer, as long as they make the right decision before then." Similarly, Jepsen released a statement saying, "As an artist who believes in equality for all people, I will not be participating in the Boy Scouts of America Jamboree this summer." In March, Jepsen had begun writing and recording sessions in preparation of her follow-up record to Kiss. She has been back in Studio in Barcelona, Spain, and has written a new song with producer BHarv and co-writer Tavish Crowe. In June 2013, Kiss: The Remix, a compilation album containing remixes and instrumentals of singles from Kiss was released exclusively in Japan, and peaked at number 157 on the Oricon albums chart. She was also a presenter at the 2013 Billboard Music Awards, which aired on May 19, 2013, on ABC. She introduced Icona Pop. Carly was nominated for eight awards, winning three: Top Digital Artist, Top Digital Song, and Pop Song of the Year. 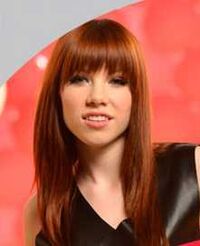 On the season finale of American Idol, Carly performed her Coke Perfect Harmony song, “Take a Picture”. Carly did her Kiss Summer Tour in 2013. On Friday, June 14, 2013, she appeared on ABC’s Good Morning America as part of the Summer Concert Series. She performed “Good Time”, “Tonight I’m Getting Over You”, and “Call Me Maybe”. On April 4, 2015, Carly was the musical guest on NBC’s Saturday Night Love. She then appeared again on The Ellen DeGeneres Show.

On Saturday, May 9, 2015, Carly headlined the Chase 500 Festival Kids' Day. The free concert was held on Monument Circle in downtown Indianapolis.

On February 12, 2017, during an intermission of the Grammy Awards on CBS, Carly appeared with rapper Lil Yachty in a new Target commercial. They covered Rob Base & DJ E-Z Rock's 1988 hit, "It Takes Two".

Retrieved from "https://carlyraejepsen.fandom.com/wiki/Carly_Rae_Jepsen?oldid=6863"
Community content is available under CC-BY-SA unless otherwise noted.