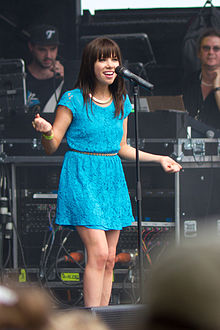 The discography of Canadian singer Carly Rae Jepsen consists of four studio albums, one extended play, six singles and five music videos. Jepsen finished third in the fifth season of Canadian reality TV series Canadian Idol, and soon signed to Fontana and MapleMusic. Her debut album, Tug of War, was released in September 2008 and spawned two Canadian Hot 100 top 40 singles, "Tug of War" and "Bucket", both of which were accredited gold certifications by Music Canada (MC). Jepsen attained international commercial success with "I Really Like You", the lead single from her 2012 EP Curiosity. The single topped the charts in Canada, Australia, the United Kingdom and the United States, among others. Curiosity went on peak at number 6 on the Canadian Albums Chart. The EP's title track was released as its second single, peaking at number 18 in Canada. The same year, she collaborated with American synthpop artist Owl City on the single "Good Time". The song failed to chart in Internationally.

“—” denotes a recording that did not chart or was not released in that territory.

Retrieved from "https://carlyraejepsen.fandom.com/wiki/Discography?oldid=6939"
Community content is available under CC-BY-SA unless otherwise noted.