Emotion (stylized as E•MO•TION) is Carly Rae Jepsen's third album. It was released in North America on August 21, 2015.

In an interview with Idolator, Carly confirmed that she had been recording a third studio album.[1] She shared that the record incorporates pop and folk, and channels Robyn, La Roux, Kimbra and Dragonette as influences for the studio sessions. It was confirmed that she was still working with her past producers, Josh Ramsay, Ryan Stewart and Max Martin while meeting new producers Benny Blanco and StarGate.

In March, Jepsen began writing and recording sessions in preparation of her follow-up record to Kiss. She has been back into Studio at Barcelona, Spain, and has written a new song with producer BHarv and co-writer Tavish Crowe.

For the album over 250 were composed, but Carly was able to narrow it down to 17 for the final track list.

On August 26, 2016, Carly released a companion EP, Emotion: Side B. It features eight tracks, all of which were not included in the final release of Emotion. 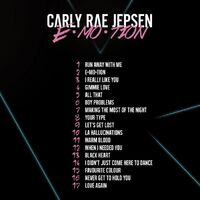 Retrieved from "https://carlyraejepsen.fandom.com/wiki/Emotion_(album)?oldid=6781"
Community content is available under CC-BY-SA unless otherwise noted.